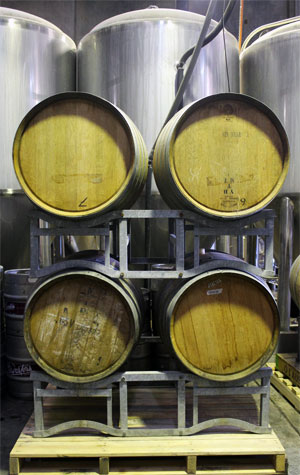 They've been playing with barrels again at Hargreaves Hill. Less than 18 months after the brewery released its first soured ale, the brewers are back with another, this time a beer aged Yarra Valley Syrah barriques for two months and styled upon the Flanders brown ales from Belgium. They sent a handful of kegs out for Good Beer Week and have more set to hit taps in the weeks following the festival.

The beer that's resulted from the three stages of fermentation (kettle, fermenters and oak) is a hazy, ruddy coloured one that offers up plenty of depth. The sweet toffee and soft roasts of the malts in the base beer are there, as is a touch of oak, some berries and a cleansing lick of tart acidity.

If you do hunt down a glass or two, then you can enter a competition to win a helicopter flight over the Yarra Valley and other assorted goodies. Take a photo and tag it #HowDoYouDrinkYours and they'll pick their favourite on International Beer Day. More here.