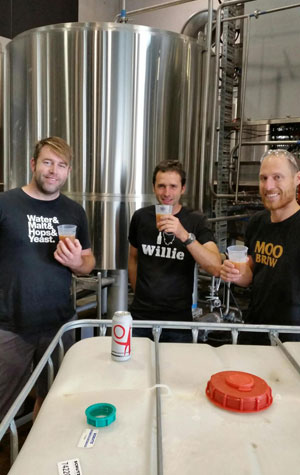 As a rule, we don't write about cider or those that make it on The Crafty Pint. It's a site about Australian craft beer, after all, and we're busy enough trying to stay on top of everything that's going on in that world without added distractions. That said, if we did, Willie Smith's would be top of the list. Since they started producing cider, this fourth generation farming family in Tasmania's Huon Valley has been leading the way for craft cider in Australia, not just in the quality of their product but in trying to educate people about what cider should be as opposed to the mass of imported, cheap concentrate-based near ciders that dominate the market.

They've also been working with a number of local brewers – not to mention their state's whisky producers – to make some unique and fascinating products. One of their latest collaborations is with Moo Brew, with whom they've created an apple saison. It features juice from their new season Royal Gala apples added to a farmhouse style ale.

The makers of the beer tell us the Royal Gala juice "provides lifted apple aromas and flavour", while the cloudy beer "is dry with a well balanced combination of spice and lemon zest from the saison yeast and fresh apple aromas" and comes with "a creamy texture and crisp head."

Just 40 kegs have been released.