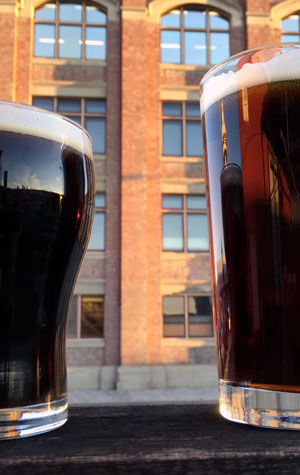 With their brewery venue up and running, the focus at Hobart Brewing Co now is very much about filling all their taps with tasty beer. They've got three winter seasonals planned, with two of them hitting taps on the very first Saturday of winter. One is a Chestnut Brown (pictured left) brewed with freshly harvested Tasmanian grown chestnuts. Described as "an English style sessionable 4.5 percent ABV, light to medium bodied dark ale", look out for "subtle nutty and caramel notes", a touch of roast and a dry finish. The beer was a serious mission, taking several days to create – read about it in head brewer Scott's Brew & A.

The second new release is one they're tagging a Tascadian Dark Ale (pictured right), a play on the Cascadian Dark Ale nomenclature given to hoppy dark ales that are brethren to India black ales, black IPAs or hoppy porters. The aim was to balance plenty of hop bitterness, flavour and aroma with the roasted malts characters found in porter and stout. They did so using a combination of American and Tasmanian hops, including Tasmanian grown Cascade, and tell us the beer is "black and opaque with a tan head, unfiltered, highly hopped with a big malt background that features a seamless blend of hop and malt flavours."