Beer Murray's Hell of the North 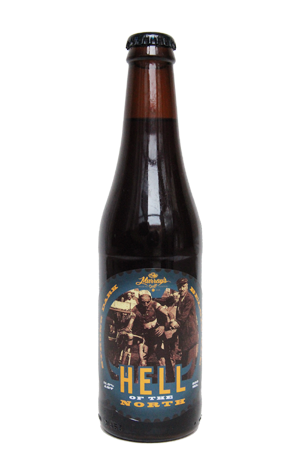 They've been blessed with head brewers at Murray's. Since launching, one or both of Graeme Mahy and Shawn Sherlock (now at Foghorn Brewhouse) has been running things in the brewery, both of them highly innovative brewers with a penchant for big and Belgian beers. Among the many beers Shawn created before Graeme returned from New Zealand was Hell of the North, a massive Belgian-inspired strong dark ale that, at its release, he told us he rated as one of the best three beers he'd ever brewed.

As part of this year's Dark Beer Month, Graeme has combined Shawn's recipe with his passion for Belgium and brought Hell of the North back and popped it into bottles too. The beer combines layers of rich malts upon a combination of three different Trappist yeasts and unfolds quite wonderfully. The cola-coloured brew emits all manner of banana, raisin, plum, candi sugar and sweet alcohol aromas and flavours as well as a perfume like spiciness before finishing with a drying peppery finish.

One to sip and savour. Ideally with some good cheese.