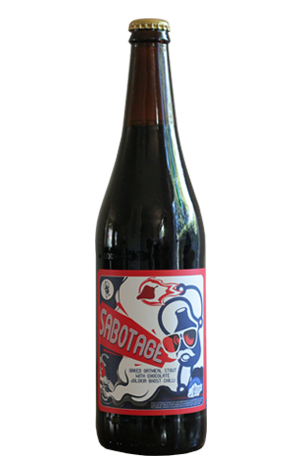 But forget about the chilli for just a moment because it’s worth considering everything else that’s going on in here. What they’ve done is brew an oatmeal stout and sweetened it with the delicacy that is organic coconut sugar. While that was happening they got oak chips, whole coffee beans and cacao nibs, soaked them in a bath of bourbon for a few days then tipped everything into the fermenter. That and the Ghost Chilli.

There will be two schools of thought about this beer. The first will think it has too much chilli and the other will think it has about the right amount. No one could possibly think it doesn’t have enough. At the start there’s a real sweetness that comes through on your palate and it’s complemented nicely by deep chocolate characters. It remains so, along with a smooth and creamy feel, as the spiciness begins to ramp up at the back of your throat. If you buy this thinking it’s a straight stout, what you see you might not get. But don’t complain if you can’t stand it because it’s the way the brewers planned it: they were trying to tell y’all it was Sabotage.