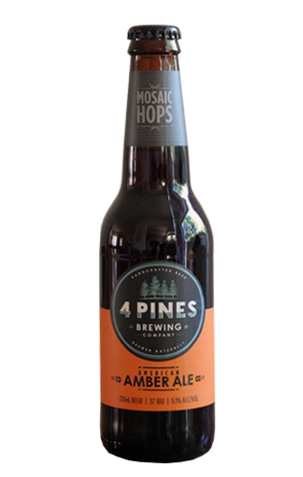 The seventh addition to 4 Pines’ core stable of beers is one that’s been around before, albeit in a few different guises. It started out in 2013 as a small batch of real ale at the Manly brewpub, released under the name Autumn Amber Ale. It won a lot of fans which encouraged the brewers to make it again the following year, only this time it was called Amber Mosaic and it got released in bottles – the first Keller Door beer to get the privilege. In 2015 it came back again as a short run release under the name Amber Ale and was duly named Champion Amber Ale at the 2015 Craft Beer Industry Association awards. If its trajectory wasn’t already set by then, you suspect the national recognition might have tipped things in its favour enough to warrant a permanent place in the family. And as of June 2016, that’s where we find it.

The beer is a really, really dark amber colour, verging on brown, with copper tones when held up to the light. It’s a robust wee beast too, the bitterness being both up front and lingering while the Mosaic hops dance around lightly in their citrusy, tropical manner on a slightly sweet and toasted toffee malt base. For anyone remotely concerned that 4 Pines’ last permanent release, the lightly hopped Indian Summer Ale, had pulled the range a little toward easy drinking territory, the Amber Ale is a counterpoint and possibly the most confronting of all their core beers. But then, being 4 Pines, it’s also well balanced, making it a welcome addition to the lineup.