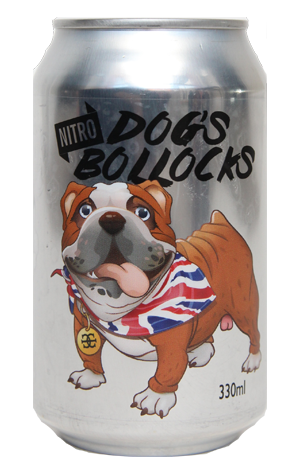 They like sailing close to the wind on occasion with the artwork for their ongoing limited release cans, with number four arriving with the title Dog's Bollocks and an image of a Union Jack-wearing bulldog complete with dangly bits on the tin. Thankfully, testicles aside, the dog – and what's inside the can – are rather more approachable representations of the Mother Country than those currently laying waste to French cities in the name of football during Euro 2016.

The reference to wind in the opening line is rather apposite too, as Mornington reckon this is Australia's first ever can to come with an extra dose of gas. The beer's full title is Nitro Dog's Bollocks as it was loaded onto the brewery's canning line with a lower than usual level of CO2 (the gas that provides carbonation in pretty much ever other beer you'll have tried) ready to be dosed up with nitrogen. Why? Well, nitro beers typically have smaller bubbles and thus produce a softer, creamier touch on the palate.

Here, that further rounds out a most English beer: all nutty, biscuity malt and subtle twiggy and earthy hops emanating from a rather lovely looking chestnut coloured drop. A tip for pouring for the full effect: vertically and rapidly into the middle of the glass then watch it settle.

Keep an eye on the brewery's Facebook page for other stockists