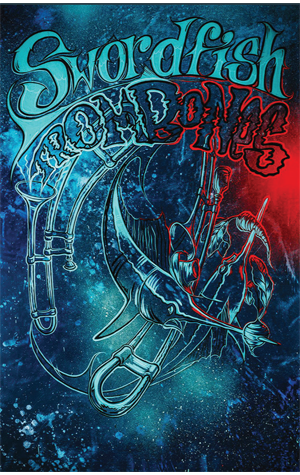 On the day that we post a beer from a Victorian brewer that reckons it's the first Aussie nitro can, a beer from a Tasmanian brewer that comes with a claim to be the country's first sonically-infused brew. Swordfishtrombones takes its name from the iconic 1983 Tom Waits album and is inspired by his "honking saxophones, farting trombones and smoking xylophones" but much else besides.

Head brewer Willie Simpson says the beer is also something of a homage to Italian craft beer pioneer Teo Musso who famously played classical baroque music to his creations via giant headphones attached to the outside of his fermenters. And continuing the sonic theme, he says that when he needs to escape the stresses of running a craft brewery, he and partner Catherine Stark attend sessions at Quiet Cone "where a gong-mistress plays various gongs and singing bowls while we lie prone in a relaxed state within said cone."

"Whatever the theory," says Willie, "we leave feeling relaxed, rejuvenated and sonically-realigned." So, he reasons, if sonics can benefit the brewer, why not the beer?

Still with us? Good, as things continue to get a little stranger... The beer is a beetroot steam ale featuring red beet (organic and sourced from Forest Hill Farm in Forth) plus sugar beet in candi sugar form, as used in the brewery's Elephants Trunk.

As for what it's like: "Infused with beets and beats, Swordfishtrombones is crimson-hued with an earthy palate redolent of mangel-wurzel," apparently. Sounds like the perfect beer for Dark Mofo, which is where you'll find it at the Winter Feast then in bottles from the brewery's Cellar Door.