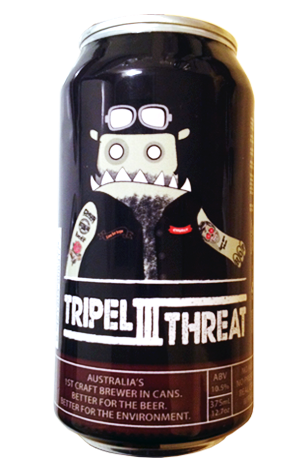 When The Australian Brewery flicked the ‘on’ switch to its canning line in 2012 it became the first independent Aussie brewery to start canning its beer. And it was done with a point of difference too, their slimline 355ml cans being a different shape to any other beer that followed, domestic or foreign. With canned beer having since caught on like a bout of the winter flu, the AB has changed a few screws on its canning machine (at least, we assume it’s that simple…) and reconfigured things so that it now spits out the ‘classic’ 375ml can style everyone will know. But if you think that meant they’d decided to follow the pack, think again as their latest limited release could well be the strongest beer any Australian brewer has elected to put in tin. Of course, being the strongest means nothing really. What counts most is that it's a belter of a beer.

Brewed in conjunction with Andrew Childs of New Zealand’s Behemoth Brewing (which in Australia is known as Chur Brewing due a trademark issue) and Beer & Brewer, the Tripel Threat is a Belgian tripel crossed with an IPA (not to be confused with a triple IPA). Its very pale yellow colour may fool you into thinking it’s quite a light beer but you ought never forget that it’s not. At 10.5 percent ABV this lithe creature is a night-ending brew should you be overzealous with your sipping, something made considerably more likely due to the fact that it’s so damn smooth, creamy and easy to drink. True, there’s some heat but it’s masked well behind candy sugar sweetness and fruity flavours from Aussie, Kiwi and American hops. If you stuck this under the nose of someone who only ever drank lagers they might be taken aback by the phenolic and peppery esters, though more seasoned drinkers will know exactly what to expect from the style. Tripel Threat is both a beauty and a beast.