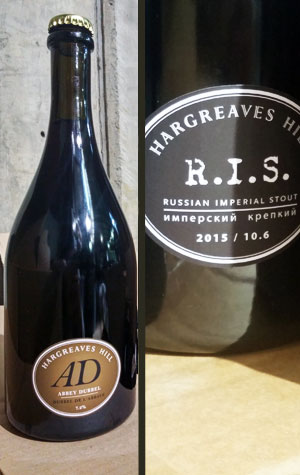 With winter digging its icy tendrils deep into the flesh of Victorians, Hargreaves Hill has kindly offered solace with the return of two of its biggest beers. The R.I.S. (Russian Imperial Stout) and AD (Abbey Dubbel) have both picked up gold medals in the recent past and both appear not just rarely but often only at the brewery's Yarra Glen restaurant. Now, however, for anyone wishing to warm their cockles via the means of malt and booze, there's a few more options.

For those unfamiliar with the beers, the AD is brewed in the traditional Belgian dubbel style, and was one of the first beers of the style to be brewed in Australia. A blend of European malts, Abbey and Trappist yeast strains and noble hops combine to create a typically complex, rich and fruity affair. For this latest batch, the brewers reckon it's an affair with "aromas of sarsaparilla, brown sugar, chai spice and banana ... ginger nut biscuit, sweet dates and raisin." Well paired with the third course of a wintry evening dine, they reckon, although they don't specify how many courses you should be having in total but we'll assume it's not a 12 course degustation they're on about and you're only up to the cucumber and mint amuse bouche.

As for the 2015 vintage of their R.I.S., they tell us it "remains a black, velvety and luxurious example of the imperial stout style" that's built upon a towering edifice of specialty and dark malts to create "a rich, long body of liquorice, molasses and dark chocolate". Ominously, like Penelope Pitstop's mortal enemy, "malt intensity cloaks a hefty bitterness on the finish."

APOD (A Point Of Difference), Mitcham