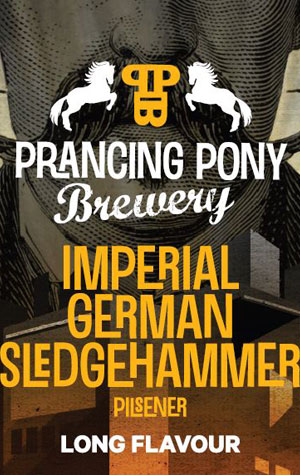 Originally brewed for GABS and to christen Prancing Pony's new 30 hectolitre, German made Braukon brewhouse, the Sledgehammer Imperial Pilsener is rumoured to have the ability to grow hair upon one’s upper lip. The idea came when Frank Sampson (head brewer) was twisting his own impressive moustache in thought; "A twist," he exclaimed... With that twist being to create a beer with a malt backbone similar to a Doppelbock (strong lager) style but the hop profile of an IPA.

To assist in the development of the recipe and help brew the beer, Frank enlisted the services of Andreas Wagner, a trained master brewer from the oldest brewery in the world, Bavaria's Weihenstephan. And, maintaining the German theme, the noble hop Tettnager was used alongside Magnum for bittering and both Tettnanger and Hallertau were used to dry hop for aroma. The malt bill consisted of 100 percent Czech grown Bohemian Pilsener malt.

The outcome is a Sledgehammer that pours golden yellow with a subtle noble hop aroma. The initial taste is of clean crisp pilsener malt sweetness, with the hefty IPA style hopping schedule resulting in a lingering bitter mixed with a dry finish.