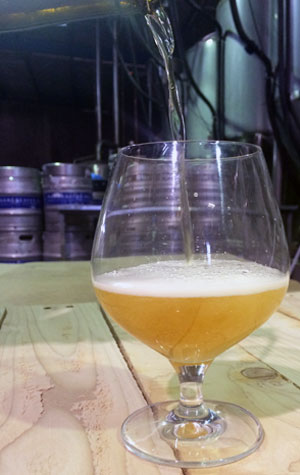 Hargreaves Hill's barrel program continues with the release of another Belgian inspired beer. This time, after a run of darker, barrel-aged sour beers comes the Barrique Belgian Blonde. Described as "a gentle ale", it spent time in former French oak Chardonnay barrels from the Giant Steps / Innocent Bystander winery across the Yarra Valley from Hargreaves' home.

According to the brewers, it's time on oak was timed to allow the fruit character to shine "while maintaining a gentle oak intensity". What does that mean in terms of the beer in your glass once you hunt it down on tap? We're told it means: "Soft fruit aromas of honeydew, banana and lychee are complemented by yeast-driven spice notes of lemon pepper. Oak provides a pleasant textural backdrop, harmonising a gentle bitterness from the Styrian Celeia hops." Sounds rather lovely.

NB: The brewery has also released another batch of its popular US-inspired Zenith IPA.