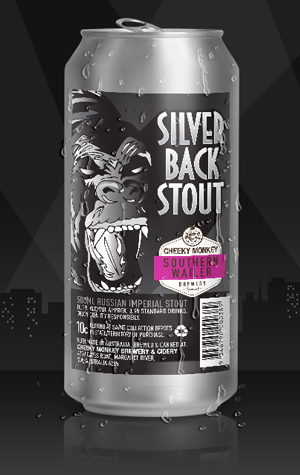 Having stepped up their canning plans earlier in the year by putting their smallest beer (Travelling Monk) and one of their biggest (an imperial India pale lager) into 500ml cans, WA's Cheeky Monkey is at it again. A few weeks on from sending the latest batch of their Silverback Stout – originally created by Red Proudfoot (now head brewer at Pirate Life) for the Margaret River brewery's first birthday – in kegs, they've now released the 10.1 percent ABV beast out in tinnies too.

In bringing the beer back for the first time in three years, current brewer Ross Terlick unleashed a barrage of ingredients, including eight types of malt and oats, and says the outcome is a beer centred around "dark chocolate and roasted coffee aromas with a sweet round mouthfeel." He reckons it's "surprisingly smooth" for its size and "sure to satisfy on these winter nights or stashed away for years to come.”

And other bottleshops in WA