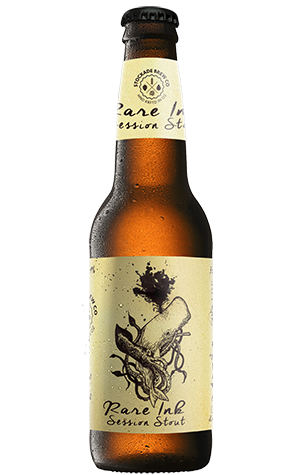 The last time Stockade brewed a stout, the brewers were clearly working off some heavily edited beer style guidelines as they came out with Fallen Angel: a coffee’d, chilli’d, stout that was incredibly, well… pale. It was an unusual prospect that might have confused more than a few drinkers, but in the end it all came together. Timed for a 2016 winter release, they’ve since returned to the world of stouts but this time with an eye on pleasing the purists.

Rare Ink is a straight up and down session stout. There’s no point in trying to talk up a massive roast character, bracing bitterness or layer upon layer of rich dark fruit because they’re simply not there at competitive levels. That’s not to say this is a beer devoid of flavour by any means, but it is purposefully light on the palate from start to finish. And at just 4.4 percent ABV, it’s not going to run you into big trouble if you helped yourself to more than a few. It's just a regular ol’ stout that you can drink with breakfast, lunch or dinner without having to contemplate the meaning of things, so if that’s what you’re looking for, Rare Ink is your beer.