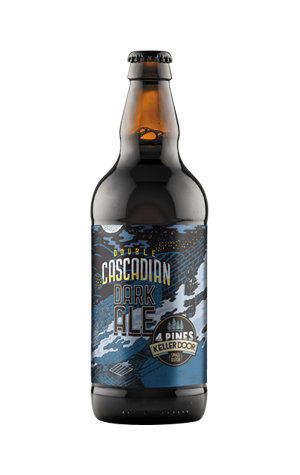 4 Pines seems to have hit a steady groove with its bottled Keller Door releases. For the most part, they’re clocking in around the 8 percent ABV mark, they’re frequently loaded up with hops and they’re lapped up by drinkers across the country. And now, on the back of various IPA variants, comes another hop heavy, hefty beast.

Cascadian dark ales are beers that exist on the spectrum not too far from the space where black IPAs operate, originating in the Pacific Northwest and taking their name from the region (which also lends its name to the popular hop variety) too. Thus, they’re about pitching the sort of volume of West Coast hops you’d find in a West Coast IPA against a much darker malt base, albeit darker malts that are typically there more for colour than flavour. Here, being a “Double” Cascadian dark ale, it means they've stepped the booze up too.

The result is a mahogany coloured brew with a reddish tinge that kicks off with plenty of fruity, citrusy (and perhaps slightly woody) hops, plus a touch of chocolate on the aroma too, before delivering a thick, borderline sticky body in which those hops meld with treacly and dark caramel malts. It’s hard to believe there’s 90 IBUs worth of bitterness in there – at least until you’re halfway down the glass, at which point the bitterness, which has developed a herbal, liquorice tinge, lets you know it’s laid down its blanket and intends to stick around.