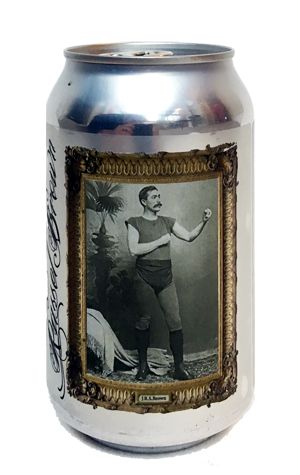 They're wasting little time ripping through their limited release #tinnage brews at Mornington Peninsula this winter. It's not that long since we got our hands on #tinnage004 – a creamy ESB that was Australia's first nitro'd can – and they're remaining in hearty malt territory for #tinnage005, albeit with a fruity dose of yeasty fun.

Russel Brown is the latest of their previously draught-only limited releases to graduate to the canning line and is a Belgian style ale built upon the foundations of their excellent Brown Ale. Onto those foundations have been added a Belgian yeast, some American hops and rather more booze (as well as a framed photograph of a gentleman boxer, JRS Brown). Thus you're met with aromas of raisins, fudge, cake spices and a touch of booze rising from its enticing off white, crema like head before the more familiar cocoa characters of the Brown kick in. Despite all this richness up front, it signs off with a surprisingly drying, almost roasty, tannic finish. As if Gentleman Jim had clocked you a good one right on the conk.