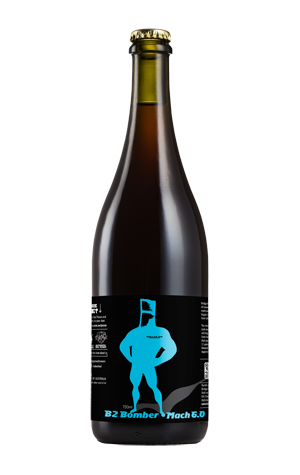 Bridge Road Brewer's anniversary beer has become one of its most eagerly anticipated. The B2 Bomber is now into its sixth year and remains the same while changing each year. It's always a combination of dark malts, heaps of punchy hops, a Belgian yeast and heaps of booze. And each year the brewers look to cram more of pretty much everything into it.

It's no different for Mk 6.0, for which the brewers added more malt and more hops – 12 different malts and 11 hop varieties including, for the first time, some US Mosaic and Kiwi Brooklyn (now renamed Moutere). That said, this time there was a little more going on than that. Head brewer Ben Kraus says they took some learnings from the 2015 version, which led to a tweaking as well as an upping of the malt bill.

The result is a beer that seems smoother from the off than the past few. It's such a big beer that we've found in the past it presents better a few weeks or months down the line from launch. Here, the voluptuous body is there, bigger than ever, and the hops still leap from it, but do so in a less prickly manner, making for a more rounded affair – at least as rounded as a 10 percent ABV, imperial Belgian black IPA can be.