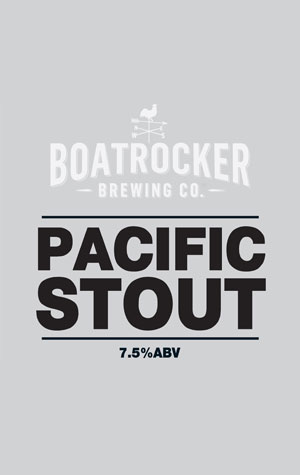 Now that Thunder Road has won its battle to call one of its beers Pacific Ale, can we expect to see a flood of beers of said nomenclature appearing on shelves? One has to assume so, although quite whether many will choose to use the word Pacific in conjunction with a hefty stout is doubtful. However, for this winter release, Boatrocker felt it was the best way to capture the essence of the beer, given it's a stout featuring Aussie hops Galaxy and Ella.

Back before it had a name, it started out as a tiny batch brewed for The Grosvenor Hotel during Good Beer Week. Said tiny batch was a blend of the base beer for Ramjet (in other words, beer that hadn't been barrel-aged) with the brewery's Pale Ale. They were so happy with the outcome, they produced a lot more for winter.

According to the Boatrocker crew: "The blending causes some of the more roasted bitter notes of Ramjet to drop away, giving a huge dark chocolate malt profile. The Galaxy and Ella hops give a strong tropical fruit aroma upfront that continues on through the finish of the beer." So if you like huge, fruity, chocolatey things, go hunt some down.