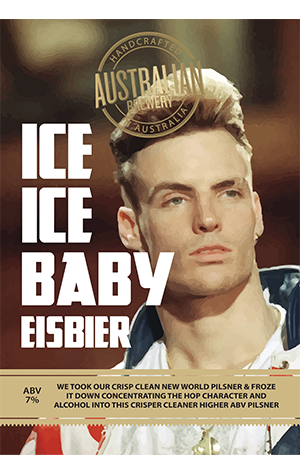 The team at The Australian Brewery has never been afraid to eschew the cries of some among the beer cognoscenti who believe lagers are boring. Indeed, sometimes you think they might even be goading them; after all, this is a brewery that, at a time before many had even considered canned beer, filled some of theirs with a light Mexican lager. The point is that you couldn’t call their journey through lagerland boring. Their New World pilsner is a fine beer, fine enough that Feral founder Brendan Varis was prompted to team up with them to brew an imperial version, 2015’s Storm Trooper. So, when GABS 2016 rolled around, they decided to have another go at bastardising their pilsner and the result is Ice Ice Baby.

The recipe is essentially that of their regular pilsner, the difference being part of the brewing process where it was partially frozen so that the icy water component could be removed. The general effect this has is to concentrate the alcohol and flavours and the actual result is to ramp the ABV up to an even 7 percent while the bitterness hits a shade over 50 IBUs. It’s still a fantastically clear beer but, hey, it’s also still a lager so is not going to excite everyone. However, the mere fact that it’s an eisbier in a land where they’re very few and far between means it’s a cold one worth tracking down this winter.