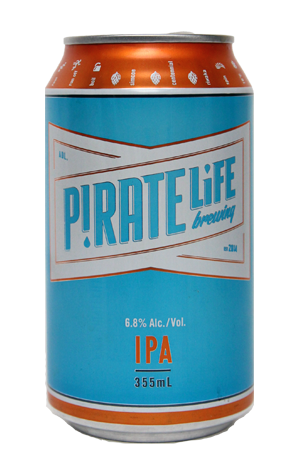 Given they opened their account with a session IPA, pale ale and imperial IPA, it was surely only a matter of time before Pirate Life added an IPA to their lineup. And, given how good all three of their previous hoppy releases were, it was surely a given that the IPA would be delicious when it arrived. And so it proved.

In a slight sideways step from the previous three, they added a Kiwi hop variety alongside some of their favoured US hops and, at least up front, it's the Riwaka that grabs your attention, offering a sharper, lime like twist to the aroma. It's joined by the fruity, citrusy delights of Centennial and Simcoe. Aside from that, the IPA delivers what we've come to expect from one of the most exciting breweries in Australia: heaps of hop flavour wonderfully balanced by full-bodied malts, a well judged bitterness and a smile on your face.