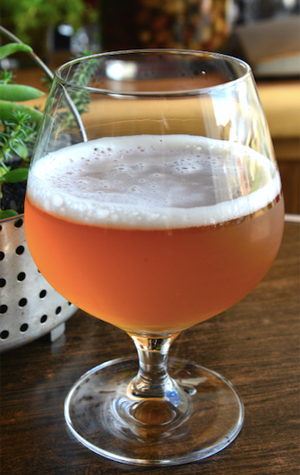 Around this time last year, Hargreaves Hill bade well to one of its brewers. Shane was off to Boatrocker and as his parting gift brewed the Yarra Valley brewery's first Belgian style tripel. And now the beer – or at least one in its image – is back.

Again, as is their wont, they've followed Belgian traditions in terms of the make up of the beer, albeit with the use of new French hop variety Barbe Rouge (said to contribute juicy berry characters to beers) and a spot of gentle spicing thanks to the addition of sweet orange peel "to complement the characterful nature of the Belgian Trappist yeast".

Head brewer Kai describes the beer thus: "Heady aromas of banana, orange blossom, fresh red berries and a tickle of aromatic pepper caress the nose, before a deft rounded palate of biscuits and baked oats succumbs to a spicy warming finish with subtle hints of vanilla and anise."

You may also spot a new version of the first barrel-aged beer to come from Hargreaves Hill on tap, the Barrique Barrel Aged Stout. This saw their regular stout aged in French oak sourced from the Yarra Valley, followed by a blend of older and younger beers. "Shiraz notes continue to come through on the aroma," says Kai of the 6 percent ABV beer, "with nutty cherry and almond characters in counterpoint to the traditional roasted malt character of our regular stout. The oak and a gentle acidity add a textural complexity to the palate, with a depth of character from further fermentation within the barrel."