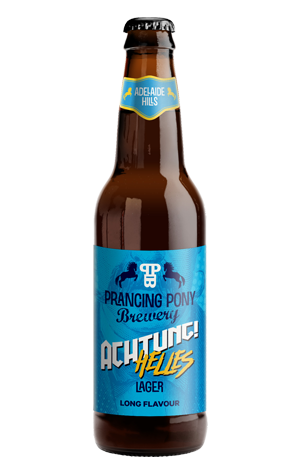 The German word "Achtung" is generally used as a warning or to obtain the attention of unsuspecting travellers. However, there's no danger to drinkers here as the beer bearing the name is already an award winner; Prancing Pony’s Achtung! Helles took out the best pilsener trophy at the Royal Adelaide Beer and Cider awards in 2016 before it had even been released to the public.

Inspired by traditional Bavarian style lagers, this beer forms one part of the Prancing Pony’s heritage range. Eventually, the intention is that this will feature seven beers in total, beers that will bring owners Frank and Corinna’s German roots to the drinker’s mouths.

The style name Helles translates as "bright one" and, as this suggests, it pours a bright golden colour. It's a malt driven drop with one eye on the Corona drinkers of the world, in the hope of swaying them towards the tastier side of beer. The brewers reckon it's best drunk in litre stein glasses, with the Helles finishing very dry, suggesting it's suitability as a quaffable summer lager.