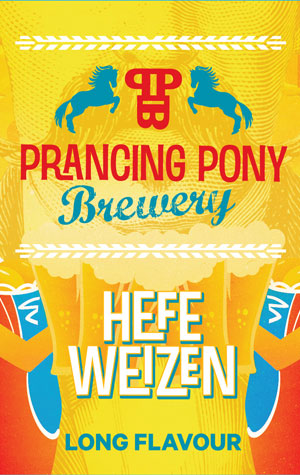 The Hefeweizen is the second beer in what will become a seven strong "heritage range" of German inspired beers from Adelaide Hills micro Prancing Pony. The Ponies had always wanted a Weizen (wheat beer) in their range but never had the capacity to make it happen; however, with the arrival of new tanks and a new brewhouse in the middle of 2016, the hefe is finally here.

It will be a seasonal release, designed for a hot summer days sitting in a beer garden in the sunshine. The beer is a favourite of co-owner Corinna as it reminds her of the long, warm summers in her home country. It comes in 500ml bottles as it is best drunk from a long tall glass with a solid head to make the most of its predominantly yeast-derived aromas.

In the glass, it pours a straw colour with a slight hazy due to the yeast. It slides down easily and is sessionable at a touch over 5 percent ABV. The banana esters are subtle but still present, making sure there is enough flavour without being overpowering.