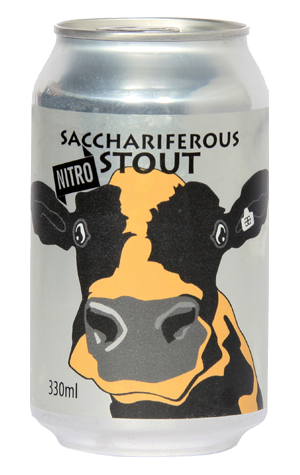 The limited run cans bearing the #tinnage nomenclature keep coming from Mornington Peninsula. And, now that they've got the ability to nitro dose their beers on the canning line, why not?

The first beer to utilise their new gadget was #tinnage004 – a creamier take on their ESB. And now the treatment has been meted out to their limited run milk stout, a beer that had already been given #tinnage duties – the debut in the series, no less. Now back as number six, the Friesian on the label has been given a yellow coat too.

But it's inside where Mornington Peninsula would no doubt you focus your energies; well, on what's inside once it's been brought outside into your glass with a vigorous vertical pour (for an example of how, check out their Facebook page). Once it's in the glass, does it differ from the straight milk stout? Looking out our tasting notes from one to the next, it would seem the answer is yes. Under its thick tan head, we found a beer that was smooth as, and that displayed less roast and liquorice and more in the way of creamy hazelnuts and milk chocolate. It's also gained in booze, but remains in the realms of the reasonable.