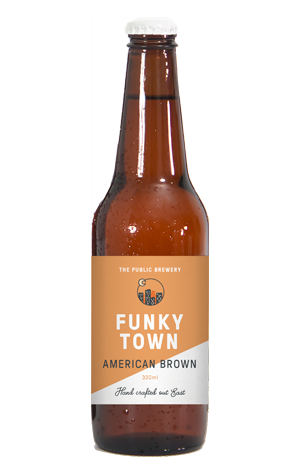 Originally titled the Get Down American Brown until brewer Brendan realised fellow Melbourne-based brewing company BrewCult had a beer of the same name, Funky Town is The Public Brewery's take on US style brown ales. Typically, such beers take as a starting point the brown ales first popularised in the UK several centuries ago and ratchet up the dials.

Here, however, while some of the dials – those marked "hops" and "malt" – have been given a hefty flick, the one marked "alcohol" has been left well alone. Thus the beer weighs in at a very sensible 4.6 percent ABV. We'll admit that when we sampled a bottle to write up these tasting notes, we figured the alcohol content would be higher so were surprised to find 4.6 on the label (generally, beers are sampled and notes taken at Crafty Towers before brewer's notes are read – keeps one's palate alert!). This wasn't because the beer was hot or boozy, just that it presents much bigger in character.

Hops are of the citrusy, piney ilk, while there's a wealth of mouth-filling dark malts at play, with chocolate and dark cocoa taking centre stage.