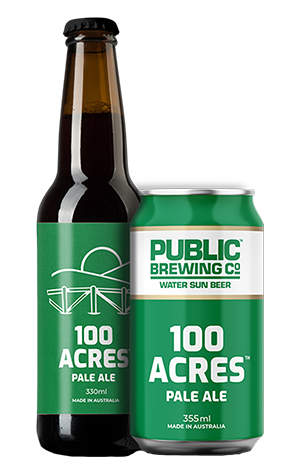 In the early months of operation, it seemed that barely a brew of The Public Brewery's pale ale went by without it being tweaked or used to showcase a different hop variety or combination of them. Now, however, with output significantly upped thanks to the opening of a second production facility (at the 100 Acres site in Warrandyte) it seems that the brewers have settled on a formula they're happy with.

It's a formula that takes the idea of an American pale ale but looks to create it with all Australian hops (what we'd suggest most newcomers to craft beer now understand an Australian pale ale to be rather than the Coopers style of pale). Five locally grown hops are in the mix, delivering clean tropical, citrus and stone fruit aromas. They dominate the flavour too, where hints of resin and spiciness make an appearance amid some caramel sweetness.