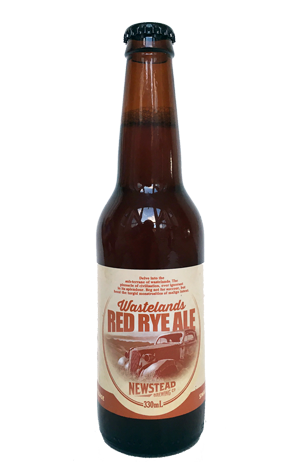 Not too long ago, Newstead popped a limited release into bottles for the first time. It was an American stout brewed with their kindred spirits at KAIJU! (and thus more of a black IPA than an American stout). Now they're back in cahoots once more for Wastelands. And once again they've piled in the hops – so many that they're claiming a hefty IPA-worthy 71 IBU [International Bitterness Units] within this red rye ale.

Here, there's a blend of Old and New World hop varieties so, while there's some citrus and pine elements, they're not as dominant as they were in The Outpost. Indeed, this is a red rye ale that delivers on what it promises, with the spiciness and bite of the rye to the fore, backed up by the aforementioned hops, which contribute grassy and herbal characters too.

A rewardingly big beer for those who like something they can sink their teeth into.

And find other stockists here