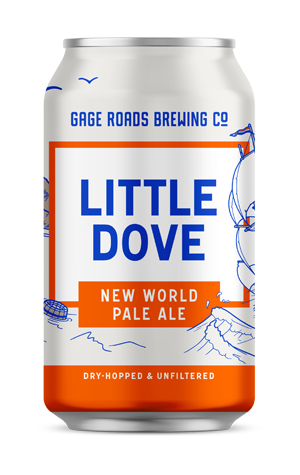 When they look back over their history, the Gage Roads team will view 2016 as quite a year for the little brewery that grew large aided by Woolies investment before "Returning to Craft" by taking back the retail giant's 25 percent share. Mostly, it's likely to be remembered for an evening in May when eyebrows were raised and jaws dropped in equal measure when they took out Champion Australian Beer at the prestigious Australian International Beer Awards. Chances are not many in the room would have plumped for Gage Roads beforehand if asked to pick the brewery that would collect the award; if they had, the chances of them picking the actual beer were slimmer still as Little Dove had only just been brewed and barely released.

The success of a beer that combined input from the broader brewing team led to Little Dove's development being fast-tracked somewhat. Kegs were sent east to capitalise on the buzz and plans put in place to add the beer to the brewery's core range. It sits atop what's a deliberately approachable lineup – and sits some way apart in character, tipping the scales above six percent ABV and packing plenty of hop character.

For all that, it remains very much a Gage Roads beer: try any of the new or reworked beers that have come out since the rebrand and you'll find balance and polish to the fore; aggressive boundary pushing isn't generally their thing. Thus here, while the waves of orange, melon and grapefruit aromas leave you in no doubt there's heaps of hops in there (60kg used for dry-hopping alone, according to the label), there's a lightness to the beer too, and enough sweet malts to rein in any overt bitterness, meaning you'll find it disappears rather quicker than a beer of this size has any right to.

The beer has gone on to prove a stayer too, quickly moved into the core lineup and, as of mid-2019, making the transition into cans too.