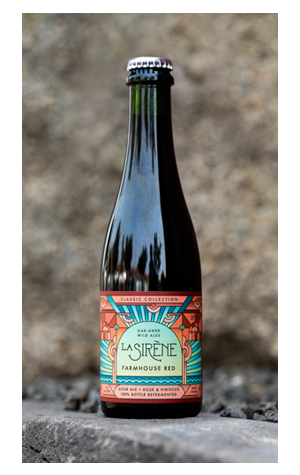 During the 2016 Good Beer Week festival, we got something of a surprise. Midway through a throughly enjoyable beer, cheese and whisky event at Boilermaker House featuring La Sirène beers, we picked up what we believed was the brewery's Farmhouse Red and found it had turned sour. Surely, they'd have noticed...

It turns out this was a precursor to what became a new addition to the brewery's core range: a soured sibling to the Farmhouse Red, which then became the replacement Farmhouse Red. The original had been possibly the heartiest of the brewery's range, based around rich specialty malts and decorated with fruity characters from the addition of ingredients such as hibiscus and rose petals.

The sour version uses the brewery's evolving house culture, which brings an acidity that lightens the beer's weight and a cleansing finish too. The lifted red berry and floral aromas are, if anything, more prominent than in the original, while there are rich toffee and sweeter acid characteristics that nod in the direction of Flanders red style ales. One to tempt your pinot noir-drinking buddies with, especially if there's a duck dish in front of them.