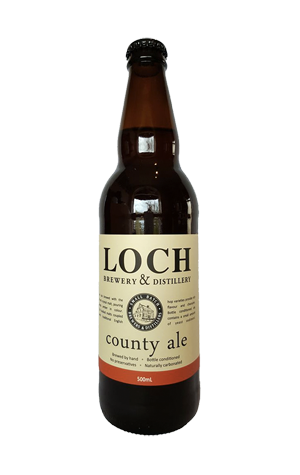 If you spent any time living in the East Midlands region of England as a real ale drinker in the last century, you'd have been familiar with Ruddles County. The beer was the best known of those brewed by the Ruddles Brewery in Leicestershire and, after ownership of Ruddles moved to ever bigger brewers, become one of the more widely available ales across the country, albeit with the recipe changing as the location at which it was brewed moved.

Loch's pours a deep amber with aromas that are sweet, biscuity and slightly bready. On the palate, there are flavours of toasted biscuit and caramel derived from the use of crystal malt, with any sweetness kept in check by an upfront and lasting bitterness and a light carbonation that creates a creamy texture. The hops are a thoroughly English affair, presenting earthy spices and some notes of tart berries that make it reminiscent of some English IPAs.