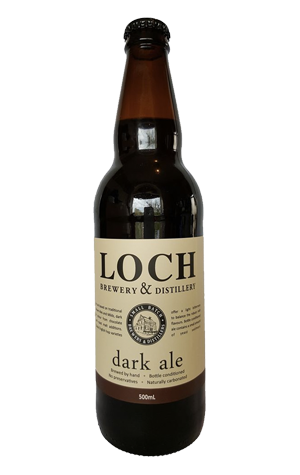 Head back far enough and pretty much all English ales would have been dark to one degree or another. From brown ales were spawned beers such as the London Porter, from which stronger versions became the new category of stouts, while heading in the opposite direction a drink – typically younger in its early days but now usually referring to milder in strength – called mild developed. Thus, even without taking into account the subsets of brown ales that followed in the UK (and have since been souped up in the New World), it's fair to say a brewery inspired by the UK calling a beer "Dark Ale" could mean all manner of things. Here, however, Loch has aimed for those early days of the brown ales that were to spawn so many children.

Their Dark Ale may lack the sourness you might have found back then, but coughs up the other elements 18th century Londoners would have been quaffing: toasted nuts, roasted coffee, dark chocolate and a prune / liquorice like fruitiness. They come wrapped in a full, smooth body, finished off with a gentle, roasty bitterness.