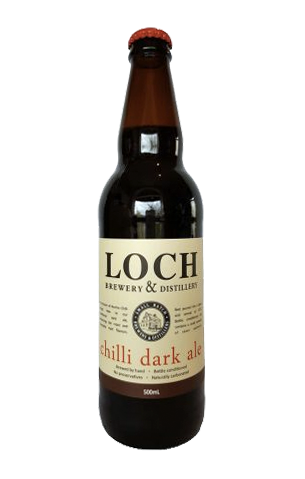 As Will wrote in the main brewery description, Loch has been developing a relationship with local Gippsland producers, both in terms of those producers using their beer and them in turn using local ingredients in their beers. One such beer is this limited release Chilli Dark Ale, which takes their Dark Ale as a base and then loads it up with Atomic chillies.

As the name suggests, these chillies come packing heat like Arnie at his 1980s pomp, albeit with the stealth of Bruce Lee. The local's farmer's goods aren't particularly noticeable on the nose – perhaps a hint of chilli sharpness amid the roasted and chocolate malts – but as for the experience on your palate... Well, it's pretty hardcore, coming on fast, building and giving the back of your mouth a decent torching. If you measured chilli heat in IBUs like you do hops, this could well be Loch's 100 IBU imperial IPA.