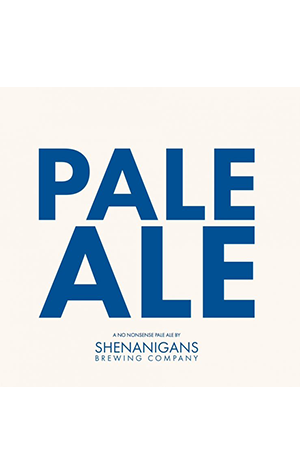 Speak to people across the wider circle of Sydney beer enthusiasts and you’ll be hard pressed to find a single one, on either side of the bar or bottleshop counter, with a bad word to say about Shenanigans’ flagship beer, Winston. With its punchy but balanced hop character, the sort-of American Pale Ale is as about as universally beloved around town as you might reasonably hope for. Yet even that is not quite enough because, once you burst free of the craft beer bubble, there are – whisper it – people who think Winston has a bit too much in the way of flavour. What those people are really after is something resembling a "regular" pale ale. And it is for them that this new beer has been created.

Shenanigans’ Pale Ale is precisely what it so boldly shouts from its label. All the tricks from their limited edition Stunt Beer range have been pocketed; there’s no chilli, no hibiscus, no coffee. It’s just a pale ale with a good dose of Australian hops. And if that doesn't sound particularly exciting to the card-carrying beer geek, it’s not meant to be. You could ponder it forever, fuss over the hop regime, consider its virtues against other beers and still, as the last drops roll from your glass, all it will have ever been is a pale ale. The thing is, once you do get to the bottom of your glass, a considered reaction is more likely to be, “Damn. That was a really good pale ale.”

At good beer venues across Sydney