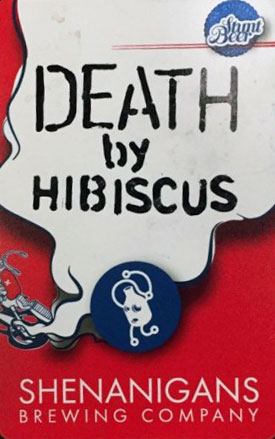 Red doesn't so much mean stop in Shenanigans’ new Death By Hibuscus saison, more like show-stopper. This is a beer that is a ludicrously, bewilderingly vibrant red colour – the kind every child would pick out first from tub of crayons just to smear across your wall.

How is it thus? Hibiscus flowers, an ingredient the brewers have used before. For perspective on how much hibiscus has been used in this beer, it’s perhaps best to refer to the technical specs: Red Sky, Shenanigans’ pretty and pretty-red IPA, used two grams of hibiscus flowers per litre of beer. Death By Hibiscus has ten times that amount meaning, scaled up, every keg has the equivalent of one one full kilogram of the flower. In other words, its a really, really red beer.

But colour means little on the palate. That's why they added mandarin zest, which works with the Topaz hops to create a beer that’s fruity up front but slides away quickly – in the manner of someone peeling away your sheets – into a long, dry and tart finish. For multiple reasons, Death By Hibiscus is one memorable beer.

And other select Sydney venues