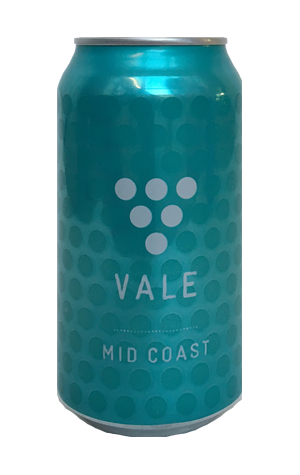 Vale Brewing pays homage to the beaches that surround their Willunga based brewery with a mid-strength bright ale called Mid Coast. Similar to the action on the local nudist beach, Maslin Beach, the beer has been stripped right back, at least in terms of booze, that is. Registering just 3.5 percent ABV, head brewer Jeff Wright believes it is perfect for a stinking hot day out at the beach. Canned in a summery bright blue tin, it's also designed to be easy to throw a six-pack into a beach bag.

An all Australian hop lineup features, with Victoria’s Secret, Aussie Cascade and Topaz helping to build the hearty 30 IBUs that deliver a surprisingly bitey, resinous texture for a beer of its size. As for the grains, the grist largely consists of pilsner, with Cara Aroma, Cara Pils and Light Munich additions giving it a biscuity touch and oats thrown in to add body.

Mid Coast pours a bright and sprightly straw colour, with a soft body that's not too thin and not too heavy. Aromas are of the tropical, citrus and mandarin sort, with a very light grassy scent before it ends in a refreshingly dry bitterness. It's picked up silverware since launching and been promoted to the permanent lineup too.