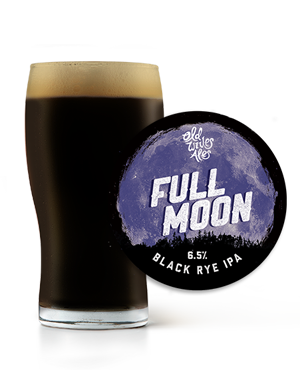 The Full Moon comes with a tale of apricot beards, snatched moments of passion, trembling in blankets and a wolfman. Which, according to the Old Wives Ales crew, translates in beer form to a black IPA, in other words a beer that looks to all intents and purposes like a stout or porter but drinks like hopped up pale beer.

In the case of Full Moon, the subterfuge on the eyes is caused by the use of Midnight Wheat, which lends a beer blackness with little in the way of chocolate or roasted characters you get from other darker malts. Joining it in the mix is a collection of punchy US hops, selected to supply the apricot of the handsome stranger's beard as well as the pine and spice familiar to drinkers of American influenced IPAs and pales.

Also in there is some rye, which adds a silken thickness to the body as well as adding to the spiciness in what's a well rounded, smooth and fruity affair with a hint of chocolate completing the picture.