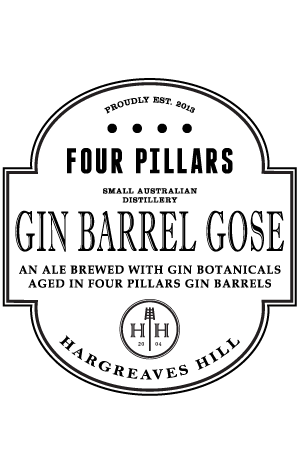 It doesn't need pointing out that what's happening in the world of Aussie spirits is as exciting as what's been happening with beer. And among the rising tide of craft distillers there are few, at least when it comes to gin, that have been creating as much of a buzz as Four Pillars. They're based in the Yarra Valley so perhaps it was only a matter of time before they joined forces with the brewery that has done as much as any in the past to encourage visitors to think of the region as more than just wine.

Thus Hargreaves Hill hooked up with their neighbours and set about creating a beer that's about as zeitgeist capturing as one could imagine: a gose [a salty, slightly sour wheat beer of German origin] featuring gin botanicals and then aged in oak. We've noted in the past how head brewer Kai Dambergs likes to wax lyrical about beer and this one could almost be a tribute to the late Leonard Cohen.

The acidity of the palate is, he tells us: "brilliant and lively" and a "perfect complement to the gentle floral, spicy and herbal botanical notes." The time spent in Four Pillars' barrels "contributes a lovely length, depth and mellowness to the beer." But that's him just warming up, so we're just going to run the rest of his tasting notes in full...

Never stop being, you, Kai!