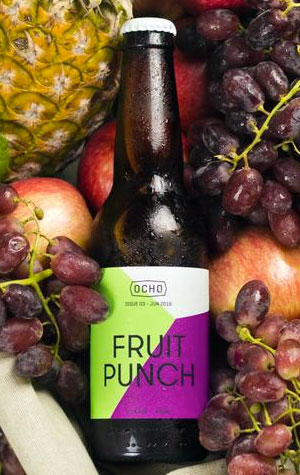 Just as Ocho's second release took advantage of brewer Stu's home state's bounty, so does beer three. This time, instead of locally grown hops, it's wine grapes that are brought into the brewery. Fruit Punch started out as a hoppy pale ale featuring fruity Mosaic hops from the States; then it was poured into a barrel and aged with 15kg of fresh Chardonnay grapes before packaging.

It pours a cloudy, rusty copper colour and delivers some spicy Chardonnay and oak on the nose alongside grape and peach hop aromas. It's soft and full on the palate, where you'll pick up tropical and grassy hop flavours, some malt sweetness and a borderline resinous, tannic, drying bitterness.