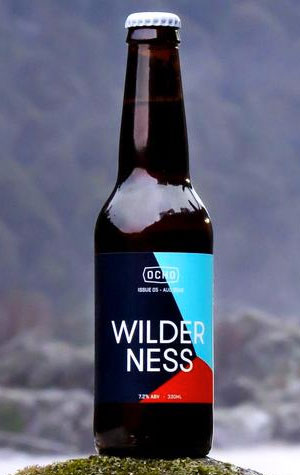 Brewer's notes: Our fifth release, Wilderness, is a beer that brings together three of our passions – hops, oak, and wild fermentation. It's what we're calling a "wild" IPA. The combination of barrel-ageing and wild yeast has brought out an earthy, grapefruit character perfectly matched to the citrusy hops.

Over three months ago, we filled a French oak barrel (ex-pinot noir) with our Deciduous IPA and allowed it to mellow and transform under the influence of a wild yeast culture. This indigenous yeast was (literally) cultured out of thin air on a frosty Launceston morning. After a couple of generations, we found it tended to contribute a peppery spice and earthy citrus character.

We are excited to be able to brew with such a unique ingredient, and proud that it gives this beer such a distinct sense of place. You can expect to see this yeast culture in some future Ocho brews.

Also (plot twist): the barrel was previously used for Fruit Punch, which explains the subtle hint of grape you might detect in this beer