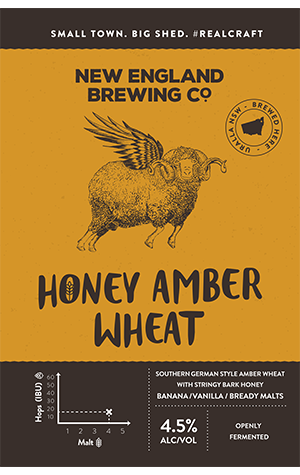 Spring 2016 has brought a bounty to the drinkers of the would be republic of New England as their eponymous brewery has put out a steady supply of new and returning treats. First was the carefully conditioned Amber Lager, then there was the West Coast IPA and now comes the most seasonally specific of the bunch.

Their Honey Amber Wheat takes its origins from the wheat beers of southern Germany but adds a decidedly local touch: as the bees of the New England region emerged and began doing their dance with the Spring flora, their honey – that of the stringy bark variety – was pilfered and added to the brew. That was on top of a base constituted of a fairly classic malt bill – pilsner, wheat, crystal and roasted – plus a couple of unfashionable hops – Magnum and Sterling.

What that leaves you with is an easy drinking beer where the yeast and malt provide the most striking characteristics; banana on the nose and bread and toasted malts on the palate. The honey sweetness is certainly present but, rather than being a beeline for those with a sweet tooth, its effect is gentle, pleasant and lightly lingering.