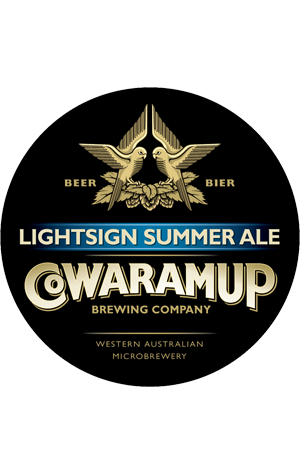 The first time The Crafty Pint called into Cowaramup's brewpub in the Margaret River, a new beer had just been tapped for the first time. Lightsign was the first of Jeremy Good's beers to step away from those of European (and predominantly British) influence.

It was a memorable evening for many reasons. The beer, which was showcasing then new-to-the-world hop Stella (now renamed Ella), was a fruity summer ale before such things became all the rage. Jeremy is wonderful company. It's a beautiful part of the world. And we were joined by a young brewer not long back from Scotland who was helping put Cheeky Monkey together. Fans of Pirate Life might have heard of him: Red Proudfoot.

Anyway, those who know Cowaramup will know that Jeremy doesn't like to muck around too much, preferring instead to try to perfect his half dozen or so beers. But, for summer 2016, change is upon us. Admittedly, it's not radical. He's not bought a foeder, there's no sour imperial stout hitting taps. Rather Lightsign has become a mid-strength. Initially it was still based around Ella, but has since moved onto German Perle hops, give it a slightly spicy finish. But, weighing just 3.4 percent ABV, should you find yourself wanting to stay at the venue rather longer than planned (as has been known to happen), you can stick to beer a little bit longer and still drive home.