Beer 4 Pines Before, During & After Christmas Pack 2016 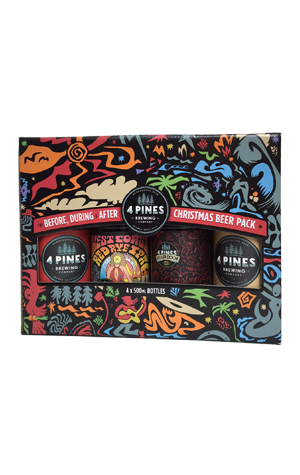 Another multi-pack with the festive season very much in mind is on shelves as we head into Summer. 4 Pines tends to put together such things with regularity and, this time around, has done so with a mixture of regular releases and a couple of past limited releases.

In the regular column (presumably for "Before Christmas" when you're easing your way into the day) are its two biggest sellers, the Kolsch and Pale Ale, about which we need to say nothing. We'd hazard a guess that the During is catered for by the Christmas Saison, a take on the farmhouse style that comes loaded up with Christmas (and traditional Christmas dinner friendly) spice additions of nutmeg, clove, coriander seeds, ginger, cinnamon and all spice and which first appeared in last year's Christmas packs.

Rounding out the foursome is one of the most popular Keller Door releases ever to emanate from the brewery: the West Coast Red Rye IPA, a cacophonous coming together of punchy West Coast hops, spicy rye and a fair amount of booze.