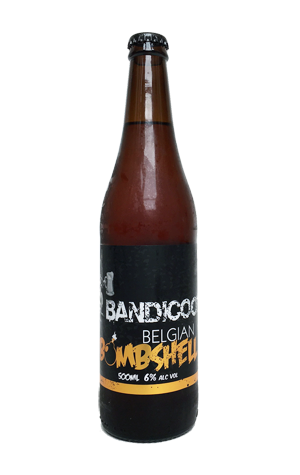 One of Bandicoot's earliest draught only releases, the Belgian Bombshell proved popular enough to graduate to 500ml bottles over time. It's a beer that doesn't fit too neatly into any particular category of Belgian ales; then again, if any country is home to brewers that don't pay too much attention to style guidelines...

To try to get a picture, it's close to a strong golden ale in terms of colour and spicy phenolics, but possesses some of the creamier, heavier malty, fruity characters you might expect from a dubbel. There's some yeast-derived banana in there too, while it finishes pretty dry despite all the richness that comes before and was the beer this site's founder chose to represent Bandicoot in The Great Australian Beer Guide.