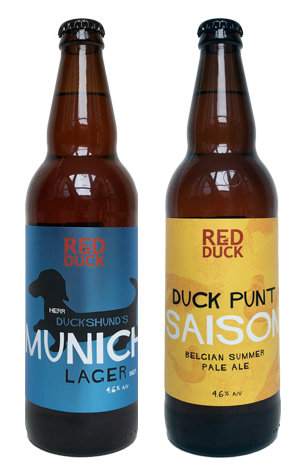 This pair of releases from Red Duck take inspiration from two of the more historic brewing regions of Europe: Southern Germany and the French / Belgian border area of Wallonia.

In one corner you've got Duckshund's Munich Lager, a beer that aims for Bavaria and lands more in heavier festbier than light helles territory with a weighty malt profile that lends it creamy biscuit and toasty characters alongside a broad bitterness created by a blend of old and new German hops.

As for Duck Punt Saison, it's one of many takes on the farmhouse ale style that the Ballarat brewery has put out in the past couple of years. Unlike some of those, this one plays it straight down the line: highly carbonated and prickly on the palate, you'll pick up some clove phenolics and candied grapefruit on the nose, some honey and biscuit malts to taste and a drying, spicy, herbal finish.

Available from the brewery cellar door and select VIC outlets.

Or, if you're quick enough, as part of a 12-pack special for Crafty Cabal members.