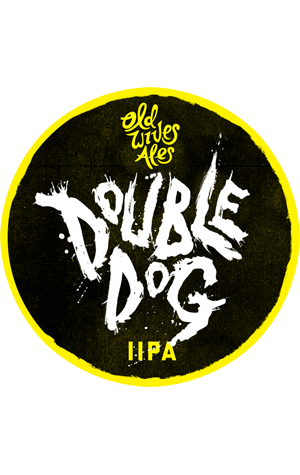 When the team behind Old Wives Ales was looking for a beer to celebrate its first birthday, the foursome quickly decided to take inspiration from the first beer they ever brewed together as a professional outfit: Hair of the Dog, a fairly lean XPA that features a prominently Australian hop profile, with some Chinook thrown in as well.

Its big brother, Double Dog, is a double IPA that is something of a Hair of the Dog on steroids, taking inspiration from its hop forward aromas and flavours while keeping a similarly lean and dry malt profile. Although the range of hops included is somewhat expanded compared to its forbearer, Double Dog presents a similar combination of American and Australian hops.

It's therefore hardly surprising that the aroma is dominated by tropical fruits and pine, with flavours of citrus and mango and a lean malt profile that keeps away any overly sweet or sticky flavours. It also makes the beer dangerously easy to drink for an 8.3 percent ABV affair.

Of course, Double Dog isn’t just a present to themselves, but also to the venues that have supported them over the last year. As a result, a limited run of kegs is currently appearing across Melbourne.

And select beer venues in Victoria