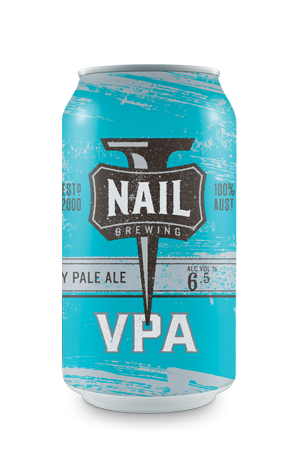 Historically, Nail founder John Stallwood is a brewer who has favoured putting malt centre stage in his beers; look over his 15 plus years in operation and you'll find most of the many gold medals and trophies he's gathered going to the likes of his Oatmeal Stout, Clout Stout, Imperial Brown and Imperial Porter. That said, the beer that's been winning Nail most fans in recent times, the Red Ale that was intended as a one-off but is now found on tap at all discerning venues in his home state of WA, shows he's a dab hand at playing with characterful hops when the mood takes him.

Look at the hoppier beers he's released and you'll find he's also not averse to going against the grain a little (pun not intended); see, for example, the Golden IPA he brewed exclusively with Melba. And now there's the VPA (Very Pale Ale), a beer that started out, like the Red, as a draught only release but, as of the end of 2016, will be Nail's first canned beer. As with the Golden IPA, it's based around a single hop and one that isn't showcased too often; while you'll find Mosaic, Citra, Simcoe, Centennial, Amarillo and the like cropping up everywhere, El Dorado, while not exactly brand new, is one of the lesser spotted US hops.

It should help VPA stand out from what's becoming a pretty crowded marketplace – not just cans but hoppy beers around the 6.5 percent ABV mark. The reason being that here it gives the beer a ridiculous juiciness; the brewery talks about huge pineapple, passionfruit and orange characteristics and, for us, it's the last of these in particular that shines. It's like having fresh orange juice – in hop oil form – squeezed onto your tongue. Kegs have been doing the rounds in WA since December 1, with canning due to take place on December 19, 2016, so look out for both spreading eastwards soon afterwards.