Beer Hargreaves Hill I Got You Beer Packs 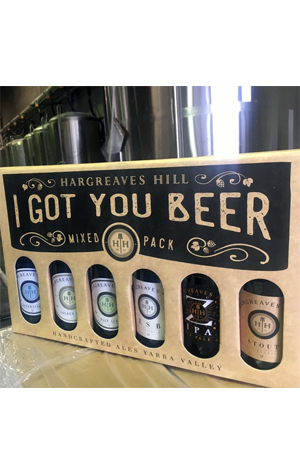 Just in time for Christmas – and coinciding with the bottling of their previously draught only Zenith IPA and the revelation of a new look for the brewery – Yarra Valley's Hargreaves Hill has put together I Got You Beer mixed six-packs.

The crafty half dozen comprises all of the brewery's core range plus the Zenith. For the uninitiated (for whom this pack would make a fine introduction to the brewery), that means the Kolsch like Golden Ale, Bavarian inspired Hefeweizen, cult classic ESB, bold Stout and a Pale Ale that's become a beer we tend to order by the pint whenever we see it on tap, which is a rarity in these days of being spoilt for choice.

As for the Zenith, we're told the brewery has been refining the recipe over its most recent keg releases before they landed upon the current formula: Warrior, Simcoe and Chinook hops added via several late kettle and dry hop additions that provide "bright layers of citrus, pine and resin", with "ale, Vienna, Crystal and biscuit malts firm[ing] up the palate for a solid, balanced and highly quaffable IPA."

The Cellar Door by The Public Brewery