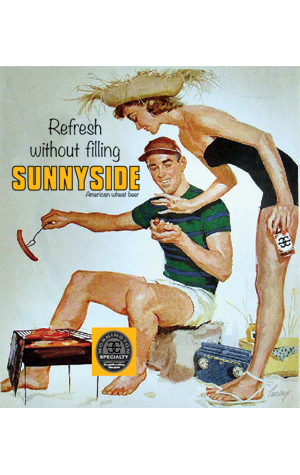 We imagine that Mornington Peninsula Brewery is going into peak beer drinking season pretty well placed. The brewery already had beers such as its Lager, Pale and IPA ready to quench thirsts and its recently released tropical hop juice like Hop Culture, complete with eye-catching cans, is garnering a deserved buzz too. But they've still had time to squeeze out one more summery brew before the end of the year.

Sunnyside is their take on the American wheat style; for newcomers to such beers, they feature a fair amount of wheat in the mix but use a "clean" yeast as opposed to those used in German style wheat beers so there's none of the spicy clove or banana characters found in the latter. They're also typically hoppy, and that would appear to be the case here, with the brewers telling us their beer leads off with "bright and enticing aromas of pine and mild passionfruit".

It comes with a twist or two as well, with rye malt and blood oranges in there, which we're told lend Sunnyside "a dry, austere palate of white pepper and a citrus tartness".