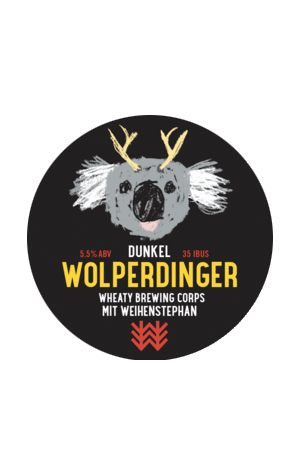 Once you've collaborated on a beer with The Crafty Pint, where's left to go? Upwards, presumably, which is where the Wheaty Brewing Corps team headed earlier this year when they took advantage of a visit to Australia by Weihenstephan Braumeister Tobias Grollo to create a beer with the Bavarian brewery that lays claim to being the oldest in the world.

The hosts described the opportunity as a situation in which "us part-time ivory tinklers had been invited to jam with Bach; surreal and utterly implausible – in the best possible way" and agreed that they'd brew a beer with one foot in Bavarian tradition – a Dunkel [dark lager] – and one in The Wheaty – a "bucket load of shining hops". The name is that of a mythical Bavarian Bunyip-like creature, the beer a dark and malty one featuring recently developed German Hops Hallertau Blanc and Huell Melon as well as local Enigma hop flowers that we're told lend Wolperdinger "a wine-like, melon and citrus zing" and "a firma bitterness". They reckon it's super smooth and balanced and will be pouring at the brewpub until it's gone.