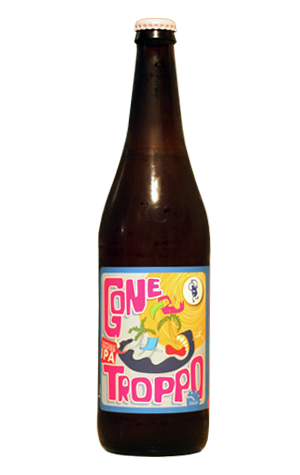 It’s a common thing when describing fragrant hoppy beers to use the term "fruity". It’s often a convenient and honest catch-all that gives the drinker some indication of what lies beneath a label. But sometimes to call a beer "fruity' is the equivalent of calling a Formula One racing car merely a mode of transport. Which brings us to Shenanigans’ Gone Troppo. This is not simply a fruity beer. This is an absolute riot of tropical fruits. When you pour this in a glass, it’s like the carnival has arrived in town.

What they've done is take a punchy West Coast IPA as inspiration, adding Mosaic, Bravo and Topaz hops. These offer citrus and tropical fruit characters of their own but that’s just the starting point because, on top of that, they also added 225kg of guava and passionfruit. “Is that a lot for a beer?” you may ask. Put it this way: the owner of their local fruit shop has probably just bought a boat.

When using so much fruit in a beer, there’s a very real danger of it becoming little more than an alcoholic fruit juice: all syrup and saccharine. But, after the initial guava and passionfruit punch, Gone Troppo is very much a beer, maintaining a fairly light body but having a healthy bitterness and slightly dry finish.

Fans of Shenanigans will be aware that the brewers usually release Grisette, a farmhouse-style ale, for summer. Instead, with Gone Troppo, they’ve released summer in a bottle.